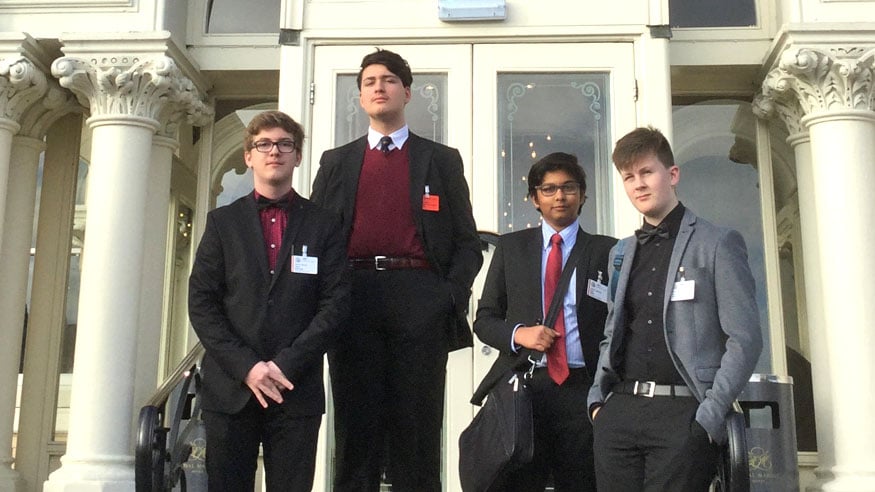 Four High School students, Aaryan Agrawal, Matei Lomaca, Callum Gandy, and Eliot Walker, spent the first week of Spring Break 2017 attending the St. Andrew’s Model United Nations (SAIMUN) conference in Dublin, Ireland. Three of our students participated as delegates representing member nation, Qatar. Aaryan participated in the Disarmament Committee (DISEC) and served as the Qatari Ambassador; Callum worked in the Social, Humanitarian and Cultural Committee (SOCHUM); and Eliot served as a member of the Special Political and Decolonization Committee (SPECPOL). Matei participated as a judge in the International Court of Justice (ICJ) focusing on maritime disputes between Somalia and Kenya.

Students worked in committee debates over the course of four days to create feasible resolutions to bring to the General Assembly. On the final day of debate, each committee brought a final resolution to be debated amongst all country and committee members. Our Qatar delegates participated in this final debate through asking various points of information. Meanwhile, the ICJ spent four long days hearing from Somalia and Kenya’s witnesses and advocates concerning their long-running maritime border dispute.  Nine judges voted in favor of Kenya, while five voted in support of Somalia. This final verdict was presented on Thursday, 13 April to the General Assembly.

Interested in world issues?  We would love you to join MUN! Feel free to contact us or a current member!