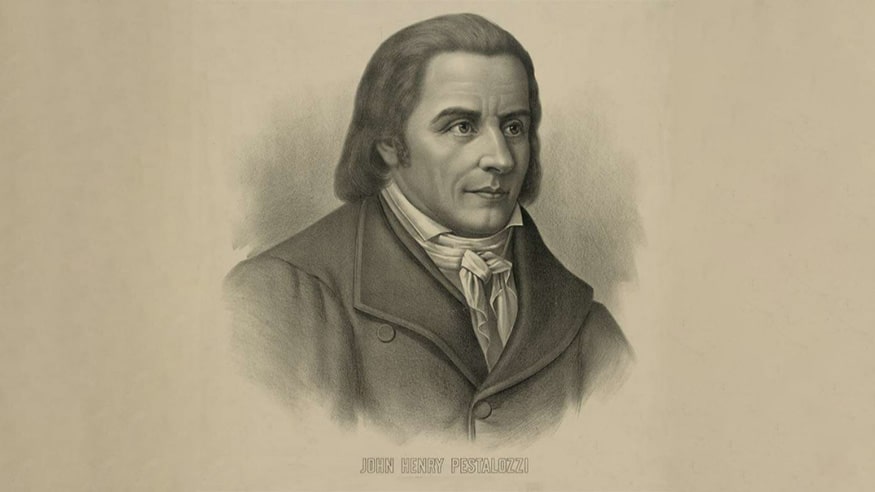 Born in Zurich in 1746, where he lived for 22 years, Pestalozzi opened an anti-poverty institute in Neuhof after going bankrupt as an agricultural entrepreneur. Unfortunately the institute ended in a fiasco two years later. Encouraged to write by a secretary at Bern City Hall, Pestalozzi complied and did that for some 18 years.

In 1789, during the occupation of the Swiss cantons by the French, he was entrusted with the education of orphans in the town of Stanss. Then he moved to Burgdorf where he decided to devote himself entirely to education. It was in Burgdorf, where he began to be known due to the success of his pedagogical methods.

Here, he wrote his fundamental work ,”How Gertrude Teaches Her Children”.

His fame became universal while he was working with and for children at Yverdon (1804-1825) in a castle near Lake Neuchatel.

The Yverdon Institute had about 165 children, a third of whom were tax-free and came from very poor families, 31 teachers (unpaid!) And 35 “seminarians”, young future teachers.

The students had about 60 hours a week! The minimum age for admission was seven years and the maximum was 11. Education ended at 15 years of age.

Teachers were required to inform parents regularly about their children’s behavior and progress. Standard methods, such as tests, grades and reports, present in most schools then and today, did not exist at the Pestalozzi Institute. Pestalozzi did not want students to be compared to each other and believed that a child’s ability should be measured only by his or her own individual merits.

According to Prof. Dr. Gerhard Kuhlemann from Stuttgart University, In Pestalozzi’s opinion, “the main goal of education should be the creation of the “moral man” and that the moral individual is self-made.

Pestalozzi believed that the basic requirements for a moral lifestyle can be found in human nature. Every child is born with natural powers and faculties – initially in an undeveloped state. They can be developed – they even contain a urge for development and a push for development – based on an inherent instinct. “The eye wants to see, the ear wants to hear, the foot wants to walk and the hand wants to catch. He says. In the same way “the heart wants to believe and love and the mind wants to think. In every faculty of human nature there is a desire to rise from its state of lifelessness and clumsiness to the developed power which, though still undeveloped, is in us only as a seed of power and not as power in itself, ” writes Pestalozzi in Swansong, “Of course, it is important for the child’s development that these natural powers and faculties can be used selfishly or directed toward moral conduct.”

‘Conformity with nature’ was Pestalozzi’s supreme desire for education. “Only education that respects the laws of nature can truly be called ‘education’. Any influence on someone who is not in accord with nature is not fit to be called education”, he famously said.

Inscription on his grave memorial in Birr, Switzerland says:

Heinrich Pestalozzi:
“Born in Zurich January 12, 1746
died in Brugg February 17, 1827
Saviour of the Poor on the Neuhof.
Preacher to the People in Leonard and Gertrude
In Stans, Father of the orphan,
In Burgdorf and Münchenbuchsee,
Founder of the New Primary Education.
In Yverdon, Educator of Humanity.
He was an individual, a Christian and a citizen.
He did everything for others, nothing for himself!
Bless his name!” 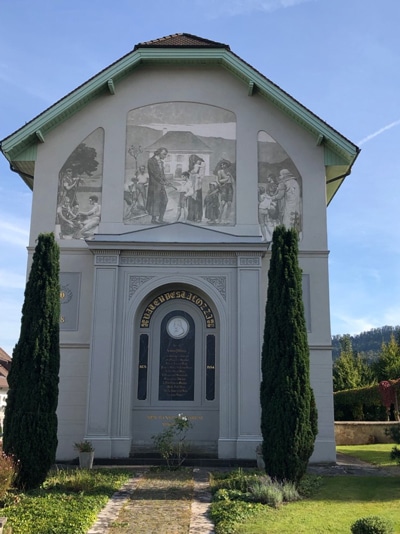