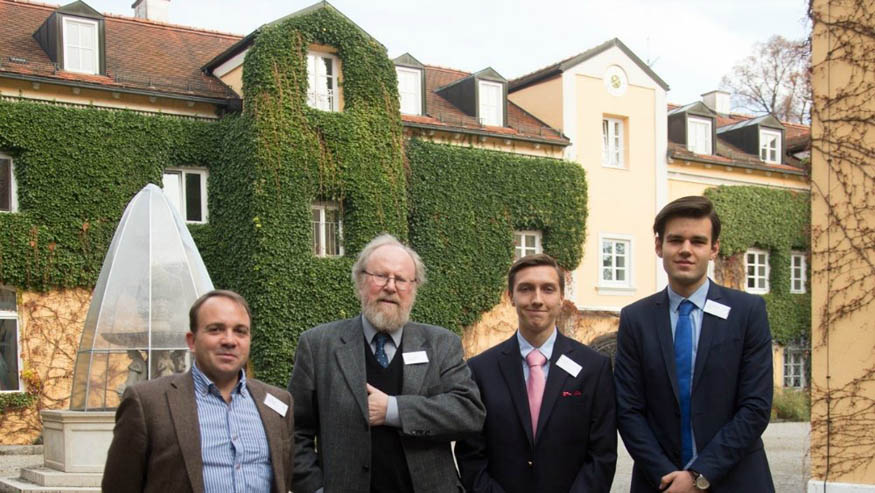 On November 12, the last of three yearly meetings of the Politische Club took place at Schloss Tutzing, beautifully located in a large park bordering Lake Starnberg. The Politische Club assembles political and economic leaders from Germany to exchange views with selected audience. The topic of last weekend’s meeting focused on the development of a new type of trade agreements (CETA, TTIP, TTP, etc) and consequences for international relations.

Dr. William Sheldon, founding Governor and current Board member of the FIS, do nated a prize which allowed two students to take part in the Politische Club . The first successful applicants were two Grade 12 students Max Thieler and Jan Hendrik Bolz. The conference was a brilliant opportunity to receive first-hand information regarding issues of global importance, such as EU priorities when negotiating trade agreements; background discussions between different high-profile political stakeholders; or self-critical reflection of media representatives on news coverage of the negotiations – to name but a few. Even more fascinating was the opportunity to interact with participants for an informal exchange of views during the evening. In addition, we were joined for breakfast by former Speaker and President of the German Parliament, Wolfgang Thierse. Talking to a politician of his standing and reputation over breakfast was an amazing experience for our students.

Amongst other high-profile participants were the General Secretary of the Social Democrat Party of Germany, Katarina Barley; ARD news anchor man from Brussels, Rolf-Dieter Krause; President of all Trade Union Organisations of Germany, Reiner Hoffmann; and the Chair of the EU Parliament’s Trade Committee, Bernd Lange. Sigmar Gabriel, leader of Germany’s Social Democrats, had also been announced to join for one of the discussions, but was excused sick. That he had to close the deal on who would become Germany’s next President might also have played a role.

Thank you for this tremendous opportunity offered by Dr. William Sheldon to be able to make connections and gather experiences that go far beyond the usual school experience.

We very much look forward to the Spring conference, focusing on the role and future development of representational democracy. Applications for participants in the school year 2017/2018 will be open to High School students from Grade 9 to 11 when joining the Politics and Culture Club in the 2nd Semester.