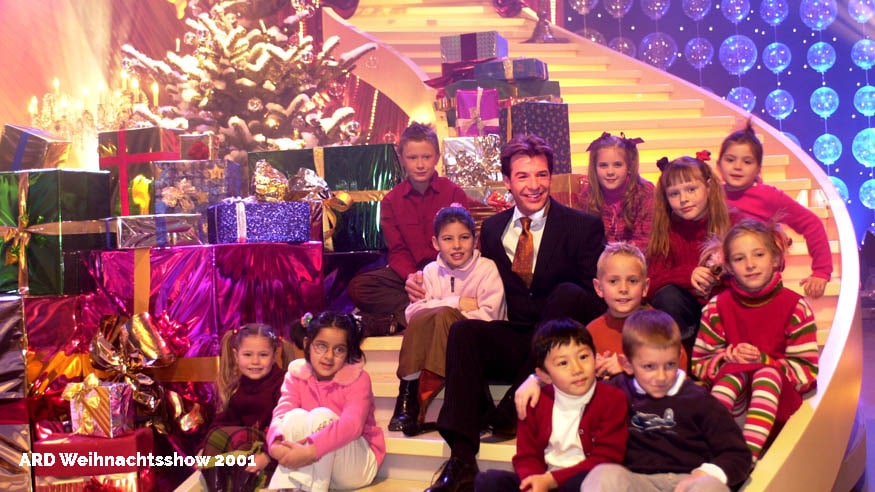 Christmas is right around the corner. The holiday season is a cozy but busy time for everyone, including for all of us at the FIS. From St. Martin’s early November, to the Christmas market on December 1 and the Early Years Winter Celebrations just last week. In this month’s article, we will be looking at past Christmas celebrations since 1998, when the FIS opened: Which festivities have become a tradition? And how have the performances evolved over the years?

In the first couple of years, besides the traditional Christmas performances, such as Winter Wonderland (2000), A Rainbow Christmas (2001), and visits to the Erlangen Christkindlesmarkt, the FIS also started celebrating Saint Lucy’s Day.

In 2001, students even turned to the big screen when they were part of the ARD Weihnachtsshow. With folk music singer and moderator Patrick Lindner and master confectioner Karl Neef by their side, they baked Christmas cookies on national television. A once in a lifetime experience, no doubt!

Only two years later, Grade 5 and 6 students took part in the Herzogenaurach town concert. At a certain point, as more families joined the school, it was no longer possible to organize the winter celebrations at the FIS in Herzogenaurach. Mrs. Chaveriat, Front Officer Manager and FIS mom, remembers it very well.

“The school building was too small to have such a big party, so we celebrated at adidas. It was on a Saturday afternoon and the whole school community came together: students, from Early Years to High School, parents, the Parent Teacher Organization, staff members, etc. The kids sang. It was great!”

In 2003, the first Christmas Market was organized, in collaboration with the Parent Teacher Organization. It immediately was a hit. Especially when Mr. Lawler joined the school in 2005.

“I remember that Mr. Lawler dressed up as Santa to entertain the kids at the Christmas Market. It was such as success, the students absolutely loved it!”, thus Mrs. Chaveriat

“Christmas in a Shoebox” was introduced in 2010. In the first year, the FIS collected 211 shoeboxes for the Humedica organization. Seven years later, the action is still an end of the year classic!

In 2012, the FIS had the great honor of welcoming the real Nürnberger Christkind to the school. On that day, the Aula was packed. For the occasion, parents had baked cookies. These were sold and the funds were donated to a good cause.

Six years, many Christmas trees and cookies, liters of hot chocolate and Kinderpunch later, still not all Christmas songs have been sung. The holiday season is one of the most exciting times at the FIS. Every year, there are new events and performances, while former traditions are brought back to life.

Mrs. Appel is especially thrilled about this year’s winter concerts.

“I am so happy that we brought back the concerts this year. We have not had those in quite a while. It gives every single Early Years and Elementary School student the chance to get on stage and perform.”

“I really enjoyed the international nature of those events. The response from parents was amazing. One Japanese mom was in tears because the kids sang a Japanese song. She said that that made her feel valued.”

Let’s see what the future brings. For now, we wish everyone a lovely break, happy holidays and a fantastic 2019!

Tom Egerton, on behalf of the FIS Community
Director